August is here and the high beach season is upon us. Along with the cooler, towels, backpack beach chairs, sunscreen and assorted water toys, CSR aficionados will want to bring some reading to wile away those lazy hours under the beach umbrella.

Losing Our Cool by Stan Cox

My recommendations range from the scary to the inspirational – and, in this summer of record-setting heat waves, it’s appropriate to start with a book that is both scary and inspirational, Stan Cox’s Losing Our Cool.

Subtitled Uncomfortable Truths About Our Air-Conditioned World, the book zeroes in on the vicious cycle we’ve put ourselves into: the greenhouse gases we’re pumping into the atmosphere are heating up the planet, which leads to us to use more airconditioning [AC], which means we emit even more CO2 in the effort to stay cool.

The U.S. uses as much AC all by itself as the rest of the world put together. But that’s likely to change as China and India ramp up their use. To get a sense of the magnitude of the problem, you have only to look at recent headlines about the record blackouts in India – where 10 percent of the entire global population lost power due to over-demand on the country’s coal plants. (The demand wasn’t all due to air conditioning, but, in this broiling summer of our climate discontent, no doubt a significant portion was.) 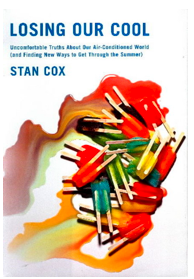 Cox says AC is a luxury we can’t afford. That’s the scary part of the book.

But he also writes about some surprising benefits of dialing down the AC -- or even going entirely without, using greener methods of cooling our bodies. Note: Cox lives in Kansas, where summer temperatures hover in the triple digits, but he only turns on his house’s central air conditioning once a year, to make sure it’s still running.

The benefits include better heat resilience, fewer allergies, more connection to the outdoors, less disease -- and even fitter physiques. And, Cox says, we can stay cool inside buildings that use a variety of old and new technology – cooling towers, high ceilings, cross ventilation, porches, and solar films on windows. All these and much more provides a cool breeze to the imagination while reading Cox’s book.

Harvest The Wind by Philip Warburg

Air conditioning isn’t all bad, of course – sometimes it’s a lifesaver. Philip Warburg’s book Harvest The Wind, gives us ample hope that AC in the age of global warming will be powered by wind, not by coal, nuclear or natural gas (which, if you take into account all the process and all the inputs, has nearly as high a greenhouse gas emissions impact as coal.)

Past president of the Conservation Law Foundation, Warburg embarked on a journey around the world – much of it in the supposedly renewables-lagging U.S. -- to find out what’s happening to wind power. What he founded electrified him (so to speak.)

The popular wisdom says wind isn’t ready for prime time – it (and solar) can’t possibly be scaled up in enough time and at a low enough cost to compete with natural gas as a replacement for coal. But those pessimistic predictions are passé, Warburg says – new technology is outstripping expectations.

He found that by 2025, wind energy could supply 50 percent of our electricity. It already supplies 20 percent of Denmark’s electricity and 17 percent of Germany’s. Even with a U.S. Congress hostile or 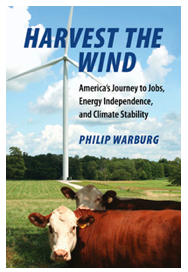 tepid toward renewables, wind power companies are creating good, well-paying jobs in places like Kansas and the Rust Belt regions of the Great Lakes and Iowa.

But Warburg also doesn’t pussy-foot around the challenges to getting to the goal of 50 percent wind power, ranging from NIMBY oppositionists (Little known fact: current wind technology kills few birds – and far, far fewer than will be decimated by coal-fired climate change) to erratic public policy that impedes investment.

These barriers have slowed the growth of our domestic wind industry — but not choked it off entirely. Wind energy is still a happening thing. A recent study shows new wind generation could soon be cheaper than new coal plants.

The stories Warburg tells are compelling – and they should inspire readers of Harvest The Wind to tell their lawmakers to lose the coal subsidies and use them to help us all “harvest the wind.”

Books To Savor During the Summer Harvest

Speaking of harvest, agriculture is on many people's minds right now – not only because of those pathetic photos we’ve all seen of knee-high corn in the drought-ridden bread basket of the nation, but also, more positively, because the summer harvest is coming in to farm stands and farmers’ markets around us.

There is a bumper crop of good books to take to the beach about agriculture, both cautionary and inspirational.

On the cautionary side is Tracie MacMillan’s terrific exposé of the impact of The American Way of Eating (also the title of her book) on the lives of those who work to feed us. She goes undercover to take jobs from the beginning of the food system chain, as a picker in the fields of California’s Central Valley, to produce stocker for Walmart, to server at Applebee’s, to show how the working poor are putting food on our tables while barely being able to afford to put food on theirs.

The remedy to this injustice is to make good, healthy food affordable for all. That’s the premise of two books: Change Comes To Dinner: How Vertical Farmers, Urban Growers and Other Innovators Are Revolutionizing How America Eats by Katherine Gustafson and The Good Food Revolution by Will Allen.

That both books contain the word “revolution” in their titles is testament to the spread of sustainable agriculture into all levels of America’s food system.

Katherine Gustafson’s book takes the reader on a fascinating tour across America to visit those who are creating this revolution. They include small entrepreneurs, like a couple who are bringing farm-fresh food to the city on a former school bus; institutions like hospitals who are sourcing their food locally and organic; innovative uses of social media and web-based technology that is bringing small farmers and consumers together; urban growers who are turning rooftops and building faces 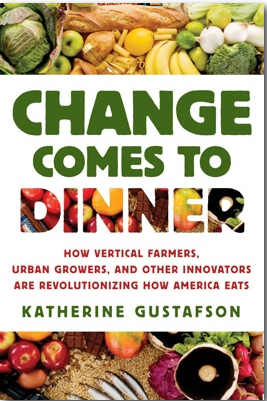 into farms; and those who are working to promote crop and seed diversity so as to create resilience in a climate-challenged agricultural future.

The Good Food Revolution shows another critical element in creating the transformation of our food system from unsustainable to sustainable – organizing communities to empower the change. In the book, Will Allen tells the story of how he cashed in his retirement account to found Growing Power, probably the largest urban farming and training project in the nation.

But his work is about much more than that: it’s about building community by building skills, education and entrepreneurship in sustainable urban agriculture. The organization is spreading the Good Food Revolution gospel in training centers across America. And Allen’s book is a gripping account that weaves his personal journey together with the journey of the grassroots movement he sparked.

So, when you load up the beach buggy – or better yet, bicycle -- remember to pack some sandwiches and salads loaded with locally-grown, organic food, along with one or two of the above books. And don’t forget the sunscreen.

Click on the links to hear my interviews with Stan Cox and Philip Warburg on my radio show, Writers Voice.