Framing worker rights as human rights elevates individual entitlement over what is in the interest of the community, solidarity, or civic virtue. 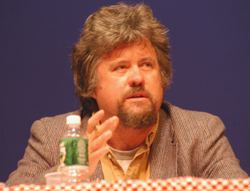 In the U.S. and elsewhere labor politics is increasingly expressed in the language of rights. Worker rights centers, websites, and projects have proliferated, especially since the growth of the university based anti-sweatshop movement and the important reports on worker “rights” published by Human Rights Watch.

Embattled trade unions and friends of Labor certainly need all the allies they can get, but there has been little examination of the possible negative effects on Labor’s interests when those interests are asserted as rights. It is as if proclaiming “workers rights are human rights” can only cause good things to happen.

George McGovern, of all people, opposed the Employee Free Choice Act because it limited the individual’s freedom not to be associated with a union. Indeed, the very name of the proposed act, emphasizing freedom and choice, was part of its problem, as the union idea involves definite limits on individual freedom in the interest of the betterment of the group.

Human rights claims are problematic because they deal with what the individual is entitled to rather than what is in the interest of community, solidarity, or civic virtue. One can sympathize with the goals of the human rights movements while doubting the efficacy of rights talk that focuses on the “human” rather than the “citizen.”

Just as states have lost the power to enforce labor rights –– or merely decided they don’t want to –– the claim that labor rights are human rights has gotten louder. There is presently no global government to enforce such rights. Perhaps workers would be better served if labor advocates called for the expansion and generalization of the conditions of citizenship rather than for human rights.

Human rights claims are conversation stoppers. Rather than engaging in the hard work necessary to convince people of their common interest and to build collective power, asserting something as a right presents an absolute claim. It seeks redress through law and the state rather than through organizing and bargaining.

But seeking emancipation through entitlement can weaken the very forms of collective action that are necessary for workers to be able to influence their own destiny. Human rights claims in the contemporary period have been most effectively used in the service of individual equality of opportunity and limiting bodily pain. In global production networks it is a group right –– the right to organize and bargain collectively –– that is most important for improving working conditions, labor market outcomes, and securing economic and political democracy.

Rights definitions are influenced by class interest. The modern human rights movement traces its origins to the antislavery campaigns of the nineteenth century.

These campaigns focused on slavery’s impact on individual freedom of choice rather than it being a form of economic exploitation. The origins of antislavery might be found in a shift in moral sentiment but the rising industrial capitalist class used it to single out slavery as something singularly evil, drawing attention away from controversies over capitalist exploitation and wage labor.

If the antislavery movement legitimized capitalist forms of exploitation by demonizing slavery, contemporary human rights practice limits itself to those oppressions that are consistent with the individualism at the heart of the global neoliberal project. The “name and shame” strategy of trying to embarrass corporations has encouraged the more morally sensitive (i.e., brand dependent) multinationals to adopt codes of conduct for their suppliers.

The issues covered most frequently are safety and health, discrimination, and environmental protection. The least likely to be mentioned are overtime hours and pay and rights to organize and bargain collectively. The latter is the “right” with the most promise for creating countervailing power to globalized capital at the grassroots.

Thus, the individualism that is central to human rights doctrine supports the very ordering of rights promoted by the largest multinational enterprises, but not those that would be most effective in empowering working people and their organizations.

The anti-sweatshop movement can be used by “enlightened” capitalists to shift attention from the problem of capitalist exploitation in general and onto specific forms of exploitation that contemporary moral convention defines as particularly egregious, such as forced labor, discrimination, and child labor.

This shift is supported in certain crucial ways by contemporary transnational human rights networks, whose focus tends to be physical injury to the body and equality of substantive opportunity, not collective rights like freedom of association, the right to organize and bargain collectively, or the right to a living wage.

Rights talk is an ideological tool that can sometimes be wielded in a way that helps to secure civil rights.

Carrying signs saying “I Am a Man” was an effective instrument in the context of the sanitation workers’ strike in Memphis in 1968, given the salience of racism in that particular situation. To argue that “workers’ rights are human rights” then means that one thinks that such a slogan makes sense in the concrete circumstances we face today.

But there is no effective system of global governance to translate “human rights” into civil rights in globalized commodity chains.

The rights to freedom of association and collective bargaining are the ones with the most chance to more fairly distribute the fruits of globalization and the ones least likely to be mentioned in corporate codes of conduct. In the hands of groups like the Workers Rights Consortium, these rights become pragmatic tools to empower nascent workers’ organizations on the ground in poor countries.

To the extent that the assertion of rights leads to collective organizing and enforceable standards, they play a role in redressing the gross inequality and exploitation that has been integral to the globalization of the last quarter century.

But it is the organizing and the standards, not the rights that should be the goal.