BP and the Macondo Spill: The...

BP and the Macondo Spill: The Complete Story

If you're looking for an excoriation of BP you'll be disappointed. But if you're seeking a broader perspective and consideration of the general context around the Gulf spill, this is the book for you. 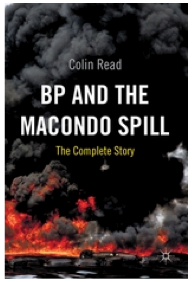 BP and the Macondo Spill: The Complete Story

While the folks at BP would probably prefer we forget that they ever had anything to do with the Gulf of Mexico, there's a strong chance that they will like this book.

In describing the background to what has been termed the worst oil spill in U.S. history—explaining in often highly technical detail the events leading up to the spill and the process of its containment—author Colin Read takes the broad view, and attempts to place BP's actions in a wider context.

A professor of Economics and Finance at SUNY College at Plattsburgh, Read offers the argument  that our demand for energy makes us complicit in the apparently preventable failures of the corporations (BP, Transocean, Halliburton etc.,) that resulted in the Deepwater Horizon blowout in April 2010, an event that caused more than 4.9 million barrels of crude oil to leak into the Gulf of Mexico.

As Read sees it, part of the problem is that as we began depleting the oil reserves offering easiest access, we created an incentive for oil companies to take more risk by drilling offshore.

Without our demand for energy, the need to employ riskier strategies would not have existed. Therefore, according to Read, we, the energy-guzzling population of the world, should share the guilt of BP and associated companies in the 2010 disaster that killed 11 men and over 6,800 animals, including birds, sea turtles, dolphins and more, and ruined the marine-dependent livelihoods of hundreds.

"When we shirk this latter responsibility [to reduce our consumption] and consider Big Oil as a monolithic and immoral entity that earns huge profits and usurps our income as it exploits the earth's resources, our consciences may be temporarily appeased," says Read in the book. "However, our own ignorance only makes the problems, and their solutions, more intractable".

Personally I don't buy this argument.

The world runs on oil-derived energy but no-one urged Big Oil companies to deliver oil at the expense of due diligence and quality procedures. No one said it was okay to kill while we heat our homes. No one agreed to any compromise of safety procedures. It was not our demand for oil that created lack of attention to safety procedures at the Deepwater Horizon rig.

The entire responsibility and accountability for the oil spill lies with those who made the decisions and managed the operations which contributed to the April 2010 disaster.

While there are compelling ecological reasons for us all to reduce our energy consumption, complicity with the inadequate safety practices of oil companies is not one of them.

BP and the Macondo Spill: The Fine Details

The book, BP and the Macondo Spill: The Complete Story, does, however, appear to deliver the complete story promised in its title. Colin Read's coverage of the oil spill story extends much wider than the spill itself, transferring the epicenter of the Deepwater Horizon disaster away from specific practices at BP and onto the entire oil sector ecosystem and its constituent parts. Indeed, the book is highly informative and educational and contains insights about many fascinating aspects of the energy sector, spills, technology, media and politics, including some definitions:

Part One of the book describes the natural and economic history of oil and the ways oil has been extracted over the years.

It goes on to provide a history of oil spills and the developments leading up to the Deepwater Horizon spill, taking care to make clear that the BP spill was far from the largest spill in U. S. oil extraction history. (The Lakeview Gusher spill in 1910 was larger, in terms of numbers of barrels released.)

The author then analyzes how the media flared up around the Deepwater Horizon story, "telling people what they wanted to hear."

In doing so, Read alleges that the media may have "cast to the wind certain journalist ethics," while also offering the view that BP "managed the crisis in a way that is likely to be more responsible and complete than any past transgressors."

Following chapters deal with the role of other corporate partners in the commissioning and functioning of the Deepwater Horizon platform, the political climate, and the concept of regulatory "oversight". The penultimate chapter — "What do we do with the World's Insatiable Need for Energy?" — concludes that "if we had continued on a path of alternative energy production that was initiated more than 30 years ago […] we would not be forced to explore in such technically challenged and sensitive environments in the first place."

Who feels sorry for BP?

After reading BP and the Macondo Spill, you may be inclined to feel almost sorry for BP.

Not only was the company backed into a corner by the need to pursue ever riskier methods in a bid to respond to relentless consumer demand for energy; its partners, Transocean and Halliburton, did sloppy jobs; the media attacked the firm aggressively; then-CEO Tony Hayward was hauled over the coals in government hearings and by the press.

As if this weren't enough, BP paid heavily for the privilege of its position as public whipping-post, recording a $17 billion quarterly loss by mid-2010, and forced to pay out over $20 billion.

Colin Read records the facts in scrupulous detail, including the fateful decisions at BP to move forward with drilling despite some prior reports of quality issues in the rig, which had been overlooked in the urgency to start drilling. While in no way suggesting exoneration for BP of responsibility for the spill and its consequences, the author does ensure that every possible potentially mitigating circumstance is aired in this book.

It's a great read, packed with fascinating information and loads of context. Those coming to the book seeking an excoriation of BP will likely be disappointed. However, those seeking a broader perspective and consideration of the general context and related facts around the Gulf spill will be very satisfied, as will those seeking to learn more about how the oil industry works. On those levels, this book makes a valuable contribution.