The Power of a Partnership

The Power of a Partnership 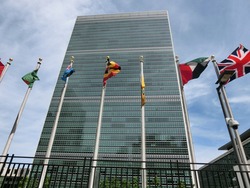 The efforts to mobilize the private sector on the road toward sustainable development are, so far, not sufficiently recognized.  There’s definitely a deficit.

Industry is the leading non-governmental factor in the fight against poverty.

Concrete claims on the economic and social sector must be formulated and translated into action in establishing joint venture enterprises for production, employment, income and taxes.

It goes without saying that the basic standards regarding human rights, labor standards, environmental considerations and anti-corruption measures are of the highest priority, prominently underlined by the UN Global Compact.

This is not enough for the development activities of the United Nations.

The UN system is in a position to deploy its own units (partnerships, private sector, advocacy, capacity development) with its well established network of personalities and facilities and to do more to identify the benefits of foreign direct investment.

In view of the responsibility vis-à-vis the growing population it is obvious that the UN Development Programme Office for Project Services, Global Compact and the UN specialized agencies such as the Industrial Development Organization, Food and Agriculture Organization, World Health Organization and International Labour Organization increasingly cooperate on one hand with governments and on the other hand with leading enterprises.

In 1997, the UN system was strengthened by the creation of the post of the Deputy Secretary-General as “global actor with significant field operation responsibilities.”

Likewise, the Country and Regional Coordinators were recognized towards the “Delivering as One” (DaO) to prove the “dove tailing” of development activities.

It is the objective to use good management, continuously progressive techniques and technology, as well as necessary market orientation in living joint ventures, to recognize risks and, above all, to benefit the member nations.

In two publications I authored -- “UN Industry Cooperative Prospectus,” originally published in 1978 and republished in 2004, and “PPP – UN system: Business Mobilization,” published in 2005 – I outlined the power of partnership.

Finally, I want to mention that German forest and mining executive Carl von Carlowitz created in 1713 the term “Nachhaltigkeit,” for economic, social and ecological requirements in land use policy.  Sustainability and inclusion are “leitmotiv,” three centuries later.