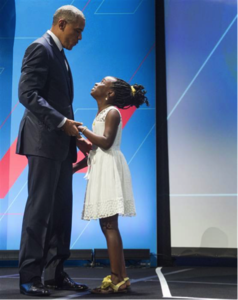 On June 14, the White House organized the first-ever United State of Women Summit with 5,000 women, girls and men across the United States and around the globe. Leaders spanning government, corporate and nonprofit sectors convened to celebrate women’s achievements, while highlighting the work still necessary to achieve gender parity. Speakers included President Barack Obama, Vice President Joe Biden, First Lady Michelle Obama, Oprah Winfrey and Warren Buffet. One common theme among the presentations was entrepreneurship’s potential to empower women in every sector. The daylong summit and adjoining events throughout the week also tackled the challenges preventing women’s success, including the lack of representation in STEM and dearth of support for women entrepreneurs.

In addition to successes, presenters highlighted the various challenges women face, including the dearth of funding for women entrepreneurs. Men receive over 90 percent of all venture funds in America, despite women-led startups producing a 35 percent higher return on investment. When factoring in race, the picture looks bleaker. Female black entrepreneurs generate over $44 billion in revenue, but receive less than one percent of venture funds. Why would investors make financially illogical decisions? Studies from Harvard University, University of Pennsylvania and the Massachusetts Institute of Technology have illustrated the deep-rooted gender bias of investors, who will choose male entrepreneurs over females – even with identical pitches. CEO of Portfolia, Trish Costello, believes that the bias is due to the gender gap among investors: over 90 percent are men. Organizations like hers are working to change the statistics by encouraging more women to become investors. Portfolia plans to activate over 100,000 women investors in five years, investing from $1,000 to $100,000 annually.

One of the six key goals throughout the conference was “Empowering Girls through STEM, the Arts, Mentoring, Academic Enrichment, and Service.” In addition to encouraging more women to join STEM careers, organizations must tackle the barriers preventing them from staying. I understand the challenges well, participating in award-winning cancer research during high school, but choosing to leave STEM in college. My employer, the YWCA of the City of New York, recently published the YWSTEAAMOCRACY report, which sheds light on both obstacles and possible solutions to attract and retain girls – especially girls of color – to STEAAM (STEM plus arts and activism) fields.

The White House is confident that the momentum generated at the summit will continue beyond the event. I am humbled that the White House chose me among 10,000 nominees to attend the conference. Hundreds of thousands more advocates are working around the clock to fulfill the summit’s vision of a world where women attain equality.