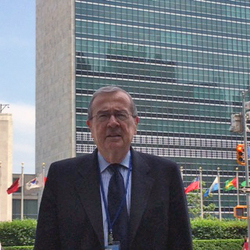 Symbolically, the General Assembly's endorsement of "The 2030 Agenda for Sustainable Development" seemed like  "global choir" response to the Friday speech by Pope Francis -- passionately reprising his concerns about poverty, climate change and capitalism. (It also served as a prelude to next week's UN General Debate when many world leaders will outline their visions for the UN for the year.)

In introducing this "big, bold, agenda" UN Secretary-General Ban Ki-Moon struck a note of urgency not unlike Pope Francis in his recent commentaries: The 2030 Agenda "is a roadmap to ending global poverty,  building a life of dignity for all and leaving  no one behind. It is also a clarion call to work in partnership and intensify efforts to share prosperity, empower people's livelihoods, ensure peace and heal our planet for the benefit of this and future generations."

UN leaders say that the new agenda is "people-centered, universal, transformative and integrated. It calls for action by all countries and all people over the next 15 years in five areas of critical importance: people, planet, prosperity, peace and partnership...ending poverty must go hand-in-hand with a plan that builds economic growth and addresses a range of social needs whole tackling climate change."

Ostensibly, The 2030 Agenda is the "successor" to the UN Millennium Goals established in 2000 with 2015 as its target year. Various estimates have concluded that formidable MDG efforts have resulted in  poverty, childhood education, health and water resources among other issues.

It is widely expected that the private sector, in partnership with civil society organizations and governments, will play an increasingly significant role in The 2030 Agenda. To that end, a Private Sector Forum will  be held at UN headquarters Saturday September 26thto explore, among other related topics, "how multi-stakeholder partnerships involving businesses [can] contribute to advancing anti-corruption, peace and stability."

CSRWire will report on that meeting on Monday.

Business in Society, @Biz_in_Society reports regularly on CSR and sustainable development in a variety of social and legacy media. John Paluszek, executive producer, is also senior counsel at Ketchum