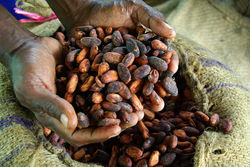 This is the most recent article in our series on Supply Chain Sustainability. For more articles, go to
http://www.csrwire.com/blog/series/75-supply-chain-sustainability-special-focus/posts

I have yet to meet a person who dislikes the taste of chocolate. We buy chocolate when we want to boost our spirit, and we give it to others to show love and affection. If not a vital part of life, it is for many indispensable. The global chocolate industry is worth an estimated $100 billion, and the leading actors are global brands such as Nestlé and Mars – some of the largest firms in the world. This whole industry is dependent on one specific input, namely cocoa beans.

It has been predicted for many years that in 2020, the world cocoa bean production will not meet the demand. By some estimates, there will be a 1 million ton shortfall, or 25 percent of 2012 global output. There are certainly many underlying reasons for this projected shortage, but the main theme is that cocoa bean production is not sustainable for the farmers. Even with a doubling in market price from 2006 to 2015, the farmers have seen little improvement. There is a disconnection among stakeholders in the value chain. To explore this notion further, we have to look to the main source of cocoa beans, namely Western Africa.

This region accounts for 70 percent of world output, and Ghana and Cote d’Ivoire alone accounts for 60 percent. In Ghana and Cote d’Ivoire, chronic poverty and poor labor conditions are driving an exodus from cocoa farming (Earth Security Index). Between 20 and 30 percent of the population in each country are directly involved with cocoa cultivation, but many farmers are looking elsewhere for a sustained income. Rubber and palm oil are more lucrative, as they require less investment and yield more consistently high crop prices. Old cocoa trees lose their productivity after around 25 years, and needs replacement – which requires pruning and fertilizing for some years before they start bearing fruits. However, much cultivated land has been run down completely, and cannot be re-planted. Ghana’s forests are declining by 2 percent a year, mostly due to cocoa expansion. For several decades now, farmers have encroached onto forests, as existing land under cocoa cultivation is degraded (Security Index).

What is missing in this equation is for the entire supply chain to invest and engage in the fundamentals of their own existence. Most efforts in the world cocoa supply chain today goes towards financial reliability for shareholders. The cocoa beans pass through various ports and financial vehicles around the world, to minimize the tax burden, before being sold on an elaborate global exchange offering many financial products in different currencies to offset future risk and secure price and supply for the eminent future. Maybe they have already developed a financial product to offset the risk of running out of cocoa beans.

Some initiatives try to engage the producers of chocolate with the producers of their vital input, mainly a pre-competitive initiative from World Cocoa Foundation called CocoaAction. CocoaAction has set sight on helping 200,000 cocoa farmers in Cote d’Ivoire. Most leading stakeholders in the cocoa industry has signed up the partake in CocoaAction, but it is widely recognized that the scale of investment and commitment needed from a new generation of cocoa farmers to overcome poverty and inequality far exceeds the capacity of efforts currently underway.

I believe the reason is that the first link of the supply chain, consisting of the millions of smallholder farmers, is repeatedly denied access to the realm of profitable business for their own products. While the whole cocoa value chain is dependent on their invaluable input, they do not know themselves the intrinsic value of their output, nor what it is actually used for. Most African cocoa farmers do not even know what chocolate looks or tastes like, as well demonstrated in a viral video of Ivory Coast cocoa farmers tasting chocolate for the first time. Divine is a fairly new chocolate company, and the only Fairtrade chocolate company that is 45 percent owned by cocoa farmers. When the farmer cooperative Kuapa Kokoo launched the idea of their own chocolate business, it was written off as 'a lovely idea, but it cannot be done' by a Ghanaian Government Representative. However, today the cooperative’s products are available in stores across the UK, and in 2013 two Divine products won Great Taste Awards. Kuapa Kokoo cooperative now counts 65,000 members, and delivers around 1 percent of all cocoa. Divine has shown that the increased integration of a farmer organization into the business value creation process can play a significant role in driving change (Security Index).

We need more examples like Divine, who dares to take on more responsibility in the supply chain. However, today’s global cocoa supply chain system is designed and developed for the large multinationals, who have shown time and again that they are not willing to pay and invest the amount necessary for a sustainable cocoa business for the future. We need to put focus on facilitating business development that includes the very foundation of the industry: the farmers.

This is the most recent article in our series on Supply Chain Sustainability. For more articles, go to
http://www.csrwire.com/blog/series/75-supply-chain-sustainability-special-focus/posts