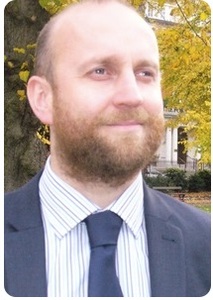 Back to the dark wages

Following the 2008 global financial crisis and resulting austerity, much has been made by governments on both sides of the Atlantic about a plan for growth or mending the fractured economy. For instance, in 2014 official figures by of the Office of National Statistics confirmed that the British economy had finally returned to pre-recession levels, ending the longest downturn in post-war history. Yet despite a fall in unemployment, the figures also confirmed that pay growth is falling, lagging well behind inflation, which in real terms means GDP per capita is 6% lower than its pre-crisis peak. This has led to serious concerns about the resilience of this spurt, not only in terms of productivity brittleness, but also the emergence of a twin-tracked recovery whereby pre-crisis decent jobs are being replaced with post-crisis indecent jobs at the very same time the cost of living is rising.

So what? How the heck does this affect advocates of corporate responsibility? Well, many in the business community view this problem as a huge threat to shared prosperity. Decent jobs go hand-in-hand with—a sustainable and inclusive recovery that balances consumer-led growth and export-development; competitive advantage based on quality as well as cost; worker productivity and customer service; job creation and an efficient tax-and-spend state. Consequently, a new vanguard of responsible business is willing to stand up for decent jobs by ‘walking the talk’ and lobbying government to develop public policy that creates a level playing field to ensure others feel confident or are compelled to do the same.

Business Campaign for Decent Jobs, launched in October, aims to reverse government and public opinion that British business – SMEs, mid-corporations and large companies alike - believe investment in higher standards of employment is bad for our economy. Coordinated by Infrangilis, the campaign mobilises a first wave of signatories representing decent and profitable businesses from all corners of the economy, with examples ranging from financial services (Unity Trust Bank), construction and energy (Newform Energy), through to food and health (Suma Wholefoods), management consulting (Carbon Free Group), and retail (Unicorn Grocery). Take for instance, Unity Trust Bank, which has retail deposits worth $1.08 billion from its clients in local government and the charitable sectors. The Bank not only pays a living wage, but has also been awarded Investors in People status, runs an apprenticeship programme, and operates an employee share ownership scheme. Another great case is Suma, which is bucking the food sector’s vicious cycle of price cuts and low pay. Owned by its partner workers, it offers exceptional benefits and job security. With a growing $64 million turnover, it is also the country’s leading independent wholesaler and distributor of vegetarian foods across the UK and in 40 countries worldwide.

Critically, this nonpartisan campaign is positioned as a major voice of the business community, as opposed to civil society. It asks government to move beyond voluntary action to do three things: 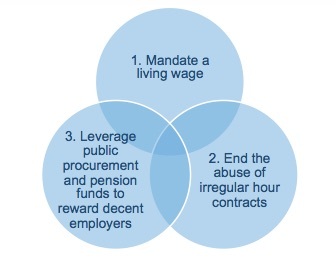 1. Mandate a living wage. The idea is that this is the minimum pay rate needed to let workers lead a decent life. The living wage is now voluntary set at £8.80 an hour in London and £7.65 an hour in the rest of the country. By comparison, the national minimum wage is significantly lower at £6.50 an hour. More than one in five of Britain’s 25 million workers are paid less than the living wage, according to KPMG. This traps the ‘working poor’ in an unbreakable cycle of poverty.

2. End the abuse of irregular hour contracts. Flexibility in working hours can be of mutual benefit to the employee (lifestyle choice or family needs) and employer (match the required workforce to fluctuations in market demand). However, some unscrupulous employers are not providing written terms and conditions for Britain’s one million zero hours contract staff and a significant proportion of these workers report having had pre-arranged work cancelled with no notice or at the start of a shift, according to the Chartered Institute of Personnel and Development (CIPD).

3. Leverage public procurement and pension funds to reward decent employers. The British government’s annual procurement budget alone is worth £230 billion. Criteria for awarding all contracts or pension investments should be refreshed to incentivise higher job standards, ranging from youth apprenticeships through to a career ladder for older or female workers returning to the workplace in underserved markets. Public Services (Social Value) Act 2012 is a basis to address concerns about EU procurement barriers. This will also act as a spur to innovation in R&D, productivity or customer service.

Don’t let the naysayers tell you it can’t be done, change is already here…

The campaign draws upon impressive cross-country evidence which suggests that gradual wage increases does not push up unemployment. In the U.S., for example, the Business Campaign for a Fair Living Wage facilitated by the American Sustainable Business Council, a coalition of 200,000 companies, has shown there is no negative affect to the economy, with 80% of Americans polled supporting the campaign including 62% of Republications, resulting in new regional legislation in Seattle, Massachusetts, and District of Columbia).

So one question remains: if you are a true advocate of corporate responsibility, are you confident you are doing enough to lobby for good on inclusive growth?

If your company wants to get involved in the debate and spread the word about the campaign, join the conversation on Twitter at @Infrangilis_ltd #BizCampaign4DecentJobs.