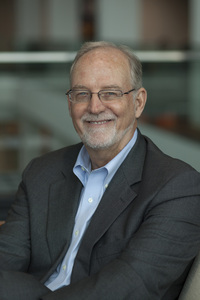 Ken Powell is chairman and chief executive officer of General Mills, which as one of the world's largest food companies, produces and markets leading brands such as Cheerios, Häagen-Dazs, Pillsbury, Betty Crocker, Green Giant, Nature Valley and Yoplait.

He has spent more than a third of his career outside the United States, and in 1990 helped launch Cereal Partners Worldwide (CPW) – the company’s joint venture with Nestlé based in Lausanne, Switzerland.

In 1996, he returned to the United States to become president of Yoplait USA, and was named president of the General Mills Big G cereal division in 1997.

Powell returned to Switzerland in 1999 to become chief executive officer of CPW, helping grow the joint venture into what is now a $2 billion global cereal business marketing in more than 130 countries around the world.

In 2006, Powell was elected president and chief operating officer of General Mills with overall global operating responsibility for the company. He was elected chief executive officer in September 2007 and chairman in May 2008.